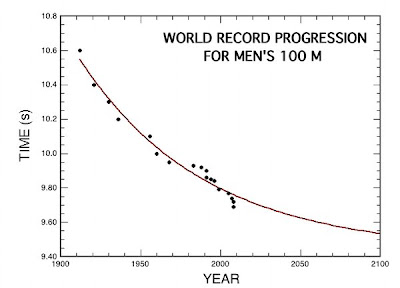 World record progression for men's 100 m. Data, from Re. 1; curve, least-squares fit of exponential function to data. (You can see the real size image by clicking on the image).

Jamaican sprinter Usain Bolt won the gold medal for the 100-meter race of the 2008 Olympic Games on Saturday, August 16, establishing the new world record of 9.69 seconds. We find world records for this race since 1912 at the Wikipedia site [1]. A few data points of the latest world records show rapid decrease (see the figure above). This trend seems to defy simple curve fitting.

However, I dared to try fitting of an exponential function, y = a + b exp(−cx), to the data. The asymptotic value a, i.e., the limit of the world record, has been found to be 9.43 seconds with a probable error of 0.17 seconds, namely, to lie between 9.26 to 9.60 seconds. During many years, unexpected factors might come to affect the making of records, so that the result of curve fitting should not be much relied upon.

Duffy [2] also considered the limit to 100-m sprinting. He fitted a logistic function to the data up to 2002, and estimated a limit of 9.48. This value is rather in good agreement with the present result.*

A logistic function is useful to model the S-curve of growth [3]. The initial stage of growth is approximately exponential; then, as saturation begins, the growth slows, and at maturity, growth stops. To use this function for the decay phenomenon that reaches a limit, it is necessary to make the function upside-down by making the coefficient in the exponential function negative. Further, one more coefficient should be added to give a finite limit. The function thus obtained has the properties of a slow initial decrease and a final decrease of approximately exponential type. To model a data set without a slow initial decrease, the exponential function of the form I used suffices.

* Originally I wrote here the following sentence put in parentheses: Among the legends in his Figure 2, "exponential fit" should read "straight-line fit". However, this was wrong. Duffy actually used the function of the form y = b exp(−cx) [4]. Reference 2 now includes new results (see sections of [2] entitled "The Performance Enhancing Drugs (PEDs)" and "100 Years - The Jamaicans"). (This note written August 17, 2012)

Posted by Tatsuo Tabata at 9:33 AM

Email ThisBlogThis!Share to TwitterShare to FacebookShare to Pinterest
Labels: sports

Sites of My Friends